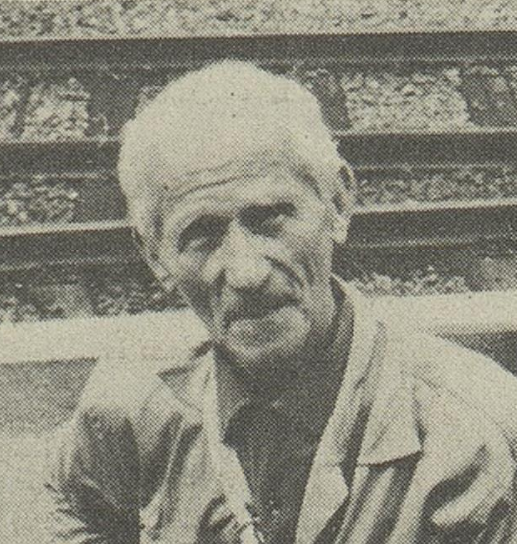 This is Reinert Lie from Stavanger, Norway, born 1894 in Flekkefjord. In 1970 he made a drastic decision to bicycle from Stavanger, Norway to Morocco in search of his brothers war grave! (approx. 4400km). The story engaged people and newspapers all over Norway, from Finnmark in the North to Lindesnes in the South.

His brother, Josef Tommy Lie (aka Joseph Lee), emigrated to the US in 1923 with his wife Johanne Marie, and son John. They settled in Brooklyn New York, and lived there until WW2. His son John Lee b.1918 enlisted in US Army ’39, 18th Infantry Regiment, 1st Infantry Division. John later died in battle in ’43 near Carthage, Tunisia, where he is buried. When this news reached his parent, it must have been devastating, and a blow that was hard to overcome. It seemd Joseph and Marie decided to move to California, but in 1948 Marie got severly sick, and dies at he hospital in Douglas, Cochise. Joseph actually lives in Los Angeles, and dies there in 1964?

This is where the story gets a bit strange. It seems that Reinert was not aware that his brother Joseph was still alive after the war, living in Los Angeles. Somewhere along the lines, the news that his nephew John dies during the war seems to somehow get mixed up, and he believes his brother is buried somewhere in Africa, possibly Casablanca. So he actually goes ahead, and starts his formidable project to bicycle to Morocco, on his best “DBS” bicycle. What is even more incredible is that he is 75 years old, and has a colostomy condition!

Reinert sets off on his bike on July 20th 1970. From Stavanger to Kristiansand, gets on the ferry to Denmark, and continues south. From time to time, newspapers follow his progress. August 6th, a report describes Reinert being hit by a truck, and ended up in hospital in Kolding, Denmark. He recovers quickly and gets on his bike again. Danish media has now picked up on this “mad norwegian”, and keeps track of his progress. What is striking about the reports is Reinerts positive nature, and how he being treated by people he meets along the way.

Soon his luck is challenged again. In a report from Amsterdam on August 24, his bicycle was stolen while he was spending the night in a hostel. The local police was searching all over Amsterdam, and he actually got his bicycle back. He sets off again now towards Antwerp in Belgium. The next newspaper report comes September 13th, when Reinert reaches Paris. He is interviewed by Norwegian “NRK” Radio. He was talking about his many encounters with great intensity and enthusiasm. The next report comes October 13th. He is now near Bayonne, and he reports that he has been taken his time enjoying his trip through France. He spent 6 weeks through France, and in Bayonne he visited the Consul to Norway, Forques. The two of them visited two Norwegian ships in port, the NAL Tyrifjord and Einar Rasmussens M/T Polycastle. In Bordeaux he met up with another Consul to Norway, Hartman. Reinert is planning his next destination to be St.Sebastian in Spain, and then onwards to Valencia, Malaga, Marbella and Gibraltar.

The last newspaper reports is printed on November 25th after he had returned home. He never made it to Morocco! During the trip over the Navarre mountains he got a severe food-poisoning, and ended up in hospital for 12 days in Valencia in Spain. He decided to end his trip, and returned home with a ship that was due back to Norway. Reinert travelled more that 3000 km on his journey to Marocco, on his favorite bicycle DBS made by Øglend. It was an extraordinary accomplishment! I wonder if the DBS company was aware of such an ambassador for their products?

Reinert Lie passed away in Stavanger in 1974, and his wife Hildur in 1981. We can only hope he got to know his brothers fate before he passed away.

Reinerts nephew, John Lie, was killed in battle during an attack at “El Guettar” in Tunisia in 1943. He was later awarded the Purple Heart for bravery. (John was my mother Liv Sundheims cousin.)

Check out my other posts: